Rheavendors’ creativity and history have been once again awarded with the chioice to make rapresent, through the machines of the company in Caronno Pertusella, the vending in the history of the great Italian design at the show COPYRIGHT ITALIA.BREVETTI, MARCHI, PRODOTTI — 1948-1970, in progress now in Rome Eur at the Archivio Centrale di Stato from March 25th through all July 3rd 2011.

The show takes a picture of that one-time moment: the Italian Boom of the 60’s, when trademarks like Olivetti, Alfa Romeo and Piaggio brought the Italian Style inside the every day objects.

Two the vending machines of rheavendors: -D102: everybody surely remembers like the historical chewing-gum dispenser, which for few liras and with a simple touch, gave smarty chewing-gum to children; — E410: the first vending machine to be showed inside a Museum, the M.O.M.A., Museum of Modern Art of New Yors, in the far 1970.

Together with the involvment, in this show the distinguishing features of rheavendors are well highlighted: innovation, research and design, which are typical Italian but at the same of worldwide perspectives.

The show, followed by a group of Scholars of Bocconi University in Milan and IUAV University in Venice, is a proposal of the Presidenza del Consiglio dei Ministri and of Ministero dei Beni Culturali on the occasion of the 150° Anniversary of the Unità d’Italia. To this end it’s particularly relevant that Italy is fairing his 150 years and rheavendors has shortly crossed the line of his 50° Anniversary. 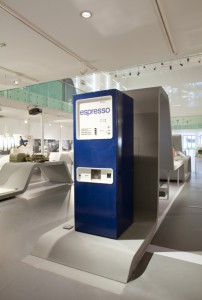 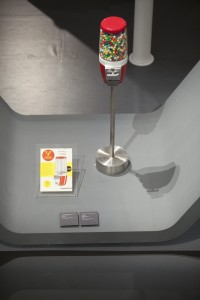